Two of Uber’s apps are category leaders. Spotify wins in music, a water-drinking app is the top health and fitness app of 2019, and — of course — Facebook owns five of the top 10 apps in the social/messaging category. (Facebook also owns four of the top 10 most downloaded apps of the decade.)

There’s a more popular battle royale game than both PUBG and Fortnite, which seem to capture all the headlines in that category. 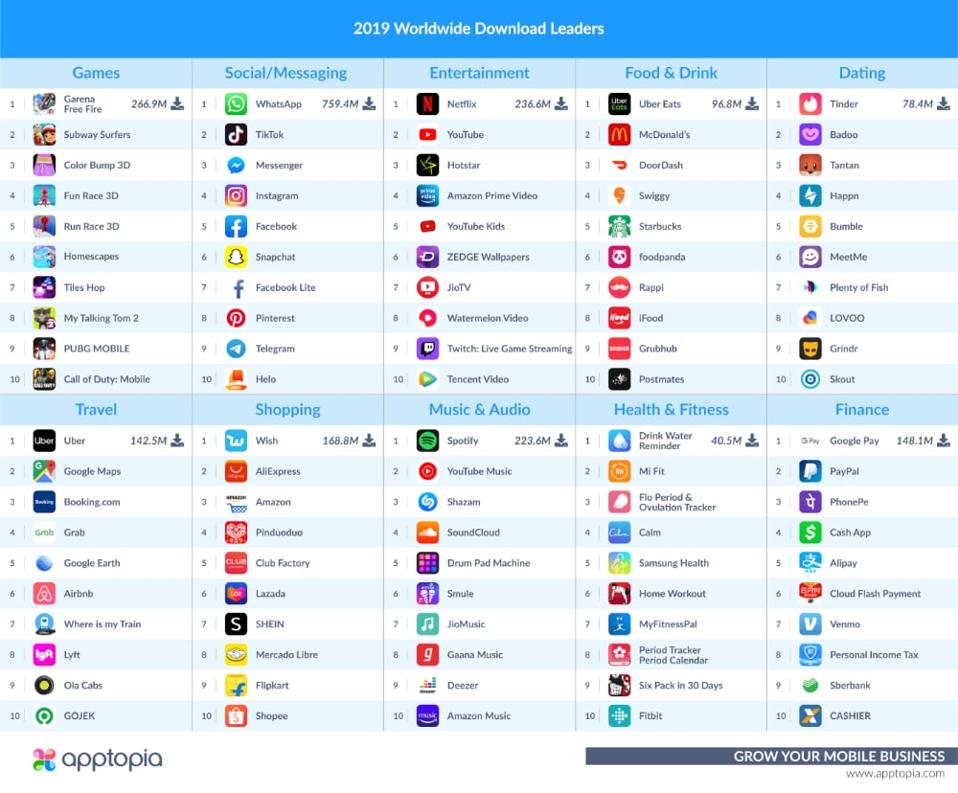 Those are just a few of the insights from app analytics company Apptopia’s list of the most downloaded apps of 2019 in each of ten categories.

Apptopia isn’t providing exact download counts for all apps, but Gareena Free Fire hit 266.9 million installs to become the most-downloaded game of the year. And one of the most-downloaded apps of the year, of course. If you’ve never heard of it, that’s probably because you don’t live in Asia or South America.

“Garena’s Free Fire takes the number one spot as a battle royale game not named PUBG or Fortnite,” Apptopia’s VP of insights Adam Blacker says. “The game is very popular in India, Brazil and Indonesia.”

The one category that sees more downloads, at least among the top apps, is social/messaging.

A massive story there is WhatsApp, owned by Facebook.

The once Europe-focused messaging app is spreading globally. Once almost unknown in the U.S., it’s becoming more common in North America, and had a massive app-ecosystem-leading 759.4 million downloads in 2019 according to Apptopia’s estimate. This app is now Facebook’s fastest-growing large platform … so much so that its runaway growth might have been a catalyst for Facebook’s recently-announced rebrand, which will make the “Facebook” name more prominent in its apps, including WhatsApp.

The app most likely to have have given WhatsApp a run for its money is TikTok.

“We estimate TikTok to have 682.2 million downloads in 2019 and this does not include third party Android stores like those commonly found in China,” Blacker says.

Streaming video or OTT companies often focus customer acquisition on mobile devices because they can track that marketing spend and result in a very granular way. And, because the connection between mobile ad and app install is virtually instant, there’s less drop-off compared to traditional advertising driving sign-ups on a smart TV app.

Interestingly, Google’s YouTube Music was the second-most-downloaded music and audio app, and Amazon Music made the list at number 10.

But music is becoming a winner-takes-all battle:

Google Pay was the most-downloaded finance app as Google tries to use a mobile-centric market without a local incumbent like China’s WeChat to become a go-to player in financial transactions. That’s a powerful place for a search provider and advertiser to live. Its major competitor there: Walmart, which owns PhonePe and achieve the number three slot in finance app downloads.

The oddest result for me?

Drink Water Reminder was the most-downloaded health and fitness app, with 40.5 million downloads. I didn’t expect an app like that to be the most popular of 2019.

Worth noting: Chinese everything-digital manufacturer Xiaomi captured second place with Mi Fit, an app that pairs with its Mi Band, a fitness band that tracks your activity, analyzes sleep, and evaluates your workouts, competing in the same space as Fitbit and Apple Watch.

And, in the always-in-the-top-10 category, Subway Surfers now has over 1.5 billion lifetime downloads and was second in the Games category.

Top Technology Titans That Shaped The Landscape In 2019 – Forbes

AMD Ryzen 9 3900X Processor And Box HotHardware Even if you’re not a tech analyst, enthusiast or hyper-connected geek that...